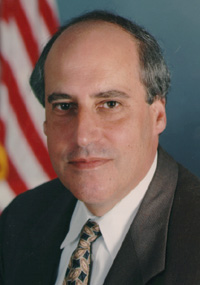 "Daniel Robert "Dan" Glickman" is an American businessman and politician. He served as the United States Secretary of Agriculture from 1995 until 2001, prior to which he represented the of Kansas as a United States Democratic Party/Democrat in United States House of Representatives/Congress for 18 years. He was Chairman and CEO of the Motion Picture Association of America (MPAA) from 2004–2010. He serves as a Senior Fellow at the Bipartisan Policy Center, where he focuses on public health, national security, and economic policy issues. He also co-chairs BPC's Democracy Project and co-leads the center's Nutrition and Physical Activity Initiative.

He also serves on the board of directors of the Chicago Mercantile Exchange, MAZON: A Jewish Response to Hunger and the board of World Food Programme/Friends of the World Food Program. He also serves on the Council on American Politics, which brings leaders from the forefront of today's political and communications arena together to address issues facing the growth and enrichment of George Washington University Graduate School of Political Management/GW’s Graduate School of Political Management where he also teaches courses.

If you enjoy these quotes, be sure to check out other famous politicians! More Dan Glickman on Wikipedia.

We screened that movie before members of Congress. Hopefully, the screening of the movie had some kind of an effect on the process.

We are glad that Bram Cohen and his company are working with us to limit access to infringing files on the BitTorrent.com website. 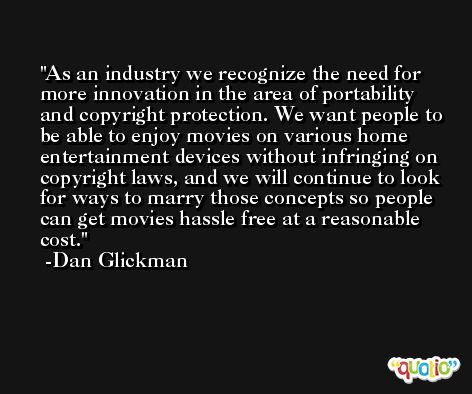 None of that makes any difference if there's not a story to put on those things. They're just empty screens.

Researching and developing these technologies now will help save the major studios and other motion picture producers and distributors money in the future. 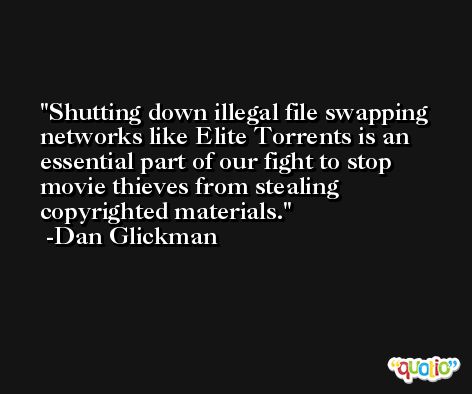 We have a responsibility to show what (America) can do, the best we possibly can.