"Curtis Staples" is a former American basketball player who played from 1994 to 1998 for the University of Virginia. He was a sophomore starter on the State Championship Patrick Henry Patriots(Roanoke VA) team in 1992. He is best known for holding the all-time National Collegiate Athletic Association/NCAA record for career three-point field goals, at 413. His record stood for nearly eight years after his career ended until J. J. Redick of Duke University broke it on February 14, 2006. Staples had actually conducted a basketball clinic in Virginia which Redick attended as a pre-teen; Redick's rare shooting ability caught Staples's eye even then. Redick told The Roanoke Times, "I was a big Curtis Staples fan."[http://home.hamptonroads.com/stories/story.cfm?story=99439&ran=180959 Southwest Va. is home to the nation’s best all-time sharpshooters / HamptonRoads.com / PilotOnline.com]

Staples attended the record-breaking game and remarked, "I've always said, like the old saying goes, records are meant to be broken. J.J. has been a hard worker and deserves everything that he gets. I'm glad to see somebody like J.J. breaking it. He's a very significant player that we will never forget." Staples played eight seasons of professional basketball overseas. He is now a successful entrepreneur who resides in Lynchburg, Virginia.

I hope to work with [J.R.] this summer to take his game to the next level. I want him to be more aggressive. He's such a nice person that it's hard to get J.R. mad sometimes. I'm trying to get him a sense of aggressiveness.

J.J. plays with that edge. When you see J.J. on the court, you can see it in his eyes. It's the eyes of a killer. He's really focused. His emotion seldom changes. If you watch him, whether he's making every shot or missing every shot, you can see that his facial expression never changes. He remains focused. 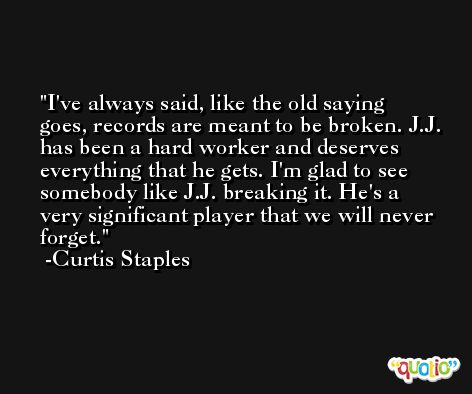 I'm very critical of J.R., but with a lot of constructive criticism.