Joseph is immediately recognizable on the ice for his masks featuring a snarling dog, drawing inspiration from the Stephen King novel Cujo, which also happens to be his nickname, derived from the first two letters of his first and last names. Throughout his NHL career, Joseph played for a number of franchises, rising to prominence during the playoffs with the St. Louis Blues, Edmonton Oilers, and Toronto Maple Leafs. He has also played for the Detroit Red Wings, Phoenix Coyotes and Calgary Flames. He was also a member of Canada's gold medal winning team at the 2002 Winter Olympics.

If you enjoy these quotes, be sure to check out other famous athletes! More Curtis Joseph on Wikipedia.

The first period wasn't the script that I wanted, but fortunately the ending was. It worked out all right.

I've played with him for eight years and a bit, and he helped me win a lot of hockey games with game-winning goals. Playing with him for that long and getting to see lots of his goals was a real pleasure. 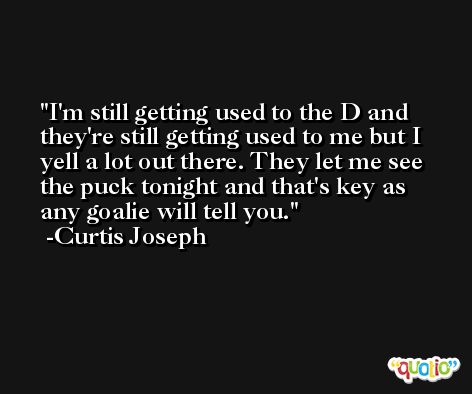 Better sooner than later because sometimes milestones, they seem tougher and tougher to get once you start talking about them. I'm happy that we came out and played arguably our best game of the year and a lot of credit to these guys.

It was certainly a special night. The best father-son ever to play, and to see Bobby pass the jersey over to Brett. And I think it's only fitting for Brett to wear No. 9 with Hull on the back. It was a nice, classy ceremony. 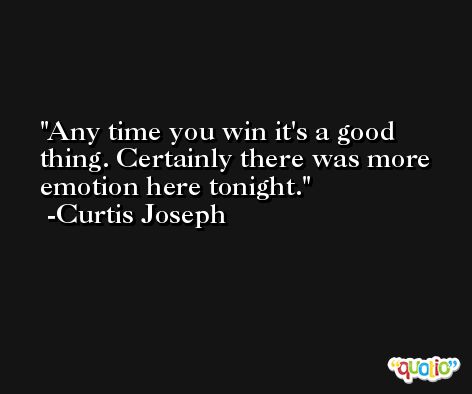 The first period wasn't the script that I wanted, but fortunately, the ending was. There was a lot of emotion out there. I grew up in the area.

We've been on the losing end of a lot of close one-goal games and fortunately tonight, we did a lot of good things. 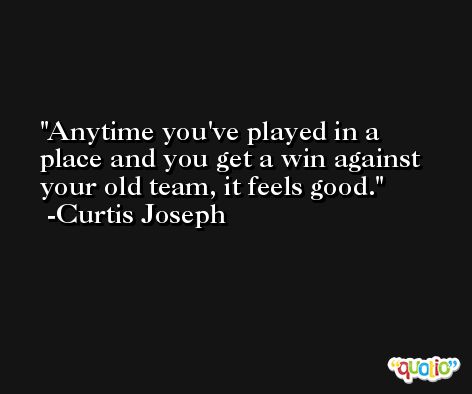