The son of Roy and Azalia Washington, Washington graduated from Prairie View A&M University in 1966 and was originally interested in becoming a doctor, but as admissions to medical school had already ceased, Washington decided to instead apply at Texas Southern University's law school.

In 1972, the state of Texas began electing members of the state House of Representatives and State Senate, for the first time, by single-member districts. Washington, along with four other minority candidates, Anthony Hall, Mickey Leland/George T. "Mickey" Leland, Benny Reyes and Cecil Bush, (dubbed the "People's Five"), ran for seats in the Texas House of Representatives. Washington was elected, and represented District 86 in the state House from 1973 to 1982. He then represented District 13 in the state senate from 1983 until 1989.

If you enjoy these quotes, be sure to check out other famous politicians! More Craig Washington on Wikipedia.

I'm hoping her death serves as a clarion call for people in this country to call for the rights of LGBTQ people and that it also serves as a call to LGBTQ people to realize that liberation is not fully achieved until we focus on matters affecting us all. 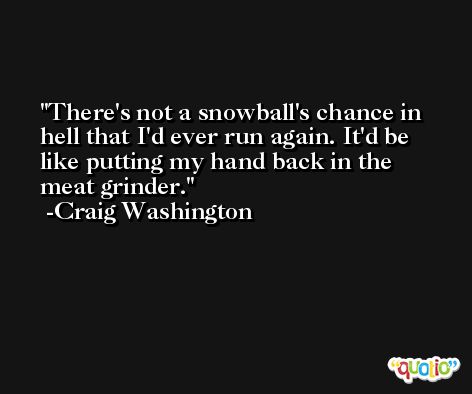