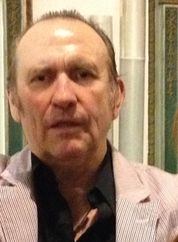 "Colin James Hay" is a Scottish Australian musician and actor who made his mark during the 1980s as lead vocalist of the Australian band Men at Work, and later as a solo artist. Regarding his solo career, Hay stated, in 2011: "I feel like it's been building for the last fifteen or so years that I’ve been touring. It's slow and steady. It's been word-of-mouth. People see the show, like it, and tell their friends. It feels very organic."

Hay's music has been frequently used by actor and director Zach Braff in his work, subsequently leading to a career rebirth in the mid-2000s. Commenting on his younger fanbase, Hay noted, "Most of them have an idea about Men at Work, but that's the subplot. They picked up on me since Scrubs (TV series)/Scrubs, they're young enough they never heard of Men at Work. But I've found if people discover you they discover everything about you."

If you enjoy these quotes, be sure to check out other famous musicians! More Colin Hay on Wikipedia.

It strikes me there's a bunch of people in power who have really strong intentions of running the world and adjusting the world to exactly how they see it. 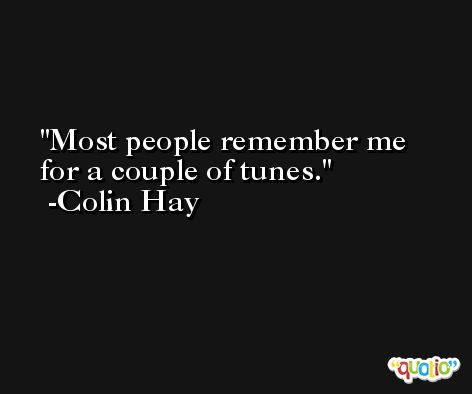 Sometimes I'm out on tour and you feel you're really getting somewhere and the audience is building and there's five or six hundred people coming to see you every night just from word-of-mouth. And then you go somewhere and you feel like you've gone back a decade and you're playing to 15 or 20 people. You think to yourself, 'Should I change my life, get another job?

I do everything from Men at Work right through to the songs I'm working on at the moment, ... It's great when you have new songs to play. 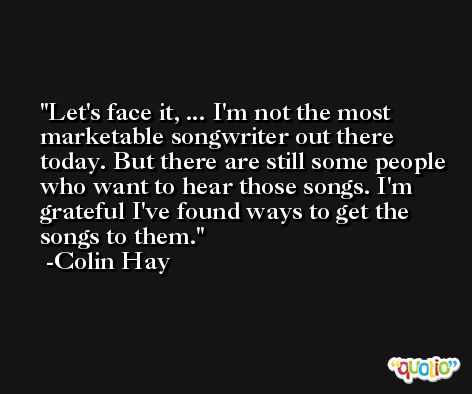 There were only a couple of people I would really trust, which has a kind of sadness to it. It doesn't really have anything to do with you, just to do with other people's perceptions of what's happened to you. It mainly had to do with people thinking you had untapped sources of wealth.

We shamelessly put that on (.