"Christina Marie Hoff Sommers" is an American author and former philosophy professor known for her writings about feminism in contemporary American culture. She coined the term "Equity feminism/equity feminist" to denote her philosophy, which she contrasts with what she describes as "victim" or "gender feminism".

Sommers is known for her criticisms of contemporary feminism, arguing that modern feminist thought often contains an "irrational hostility to men" and possesses an "inability to take seriously the possibility that the sexes are equal but different". Other scholars and feminists have called her antifeminism/anti-feminist for her criticisms and writings. Sommers rejects claims that she is opposed to feminism. Sommers's most notable books are Who Stole Feminism? and The War Against Boys, both of which are critical discussions of contemporary feminism.

If you enjoy these quotes, be sure to check out other famous writers! More Christina Hoff Sommers on Wikipedia.

Now you ask a group of young women on the college campus, 'How many of you are feminists?' Very few will raise their hands because young women don't want to be associated with it anymore because they know it means male-bashing, it means being a victim, and it means being bitter and angry.

One recommendation from the summit was to focus on supporting parents and helping them talk about issues like violence with children. Our research shows that there is a window of opportunity with preadolescents when they're most receptive to messages from their parents. 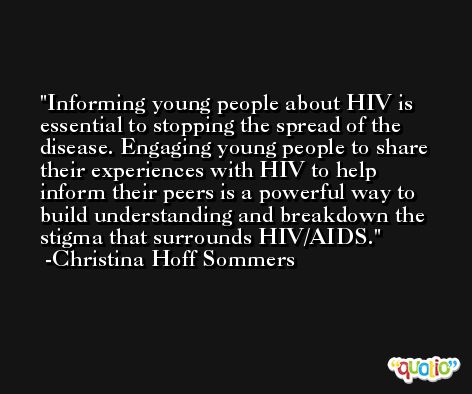 A Feminist Uses Statistics Like a Fish Uses a Bicycle.

Parents want their kids to be prepared for real life and they want them to have the facts and the information that they need to be prepared to face the situations they might face.