"Chen Jian" is the Chinese Vice Minister of Ministry of Commerce of the People's Republic of China/Commerce. He began his career in May 1969 and joined the Communist Party of China/CPC in January 1976. He graduated from Beijing International Studies University/Beijing Second Foreign Language University majoring in Spanish, and holds the title of Senior International Business Engineer.

Wei Jingsheng is a condemned criminal who is serving his sentence and, therefore, has no qualification to be awarded a Nobel prize.

[Although admitting the timing --on the heels of the Hiroshima anniversary -- was bad, Beijing diplomats defended their position.] China has all along exercised utmost restraint on nuclear testing, ... The tests it has conducted are extremely limited in number. 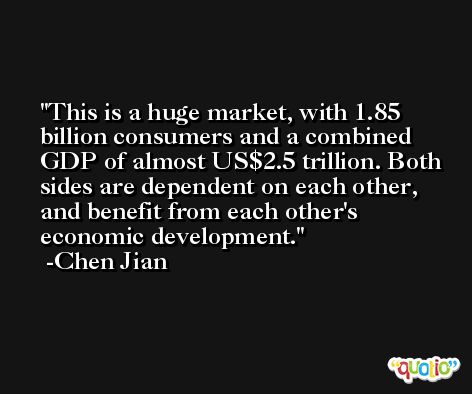 It is unjustifiable for the United States to accuse China of inadequacy in its battle against piracy.

China stands for the complete prohibition and thorough destruction of nuclear weapons.