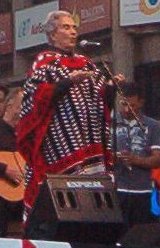 "Isabel Vargas Lizano", better known as "Chavela Vargas", was a Costa Rica/Costa Rican-born Mexico/Mexican singer. She was especially known for her rendition of Mexican rancheras, but she is also recognized for her contribution to other genres of popular Latin American music. She has been an influential interpreter in the Americas and Europe, muse to figures such as Pedro Almodóvar, hailed for her haunting performances, and called "la voz áspera de la ternura", the rough voice of tenderness. The Latin Academy of Recording Arts & Sciences, presented her with a Latin GRAMMY Statuette in 2007 after receiving a Lifetime Achievement Award on behalf of that organization.

If you enjoy these quotes, be sure to check out other famous musicians! More Chavela Vargas on Wikipedia.

At the beginning they wanted me to sing as sweet as a flower, even Ernesto Alonso put me a strapless dress and high heels and as soon as I went down the stairs I fell. I didn't even make it to the stage.

I've had to fight to be myself and to be respected. I'm proud to carry this stigma and call myself a lesbian. I don't boast about it or broadcast it, but I don't deny it. I've had to confront society and the Church, which says that homosexuals are da. 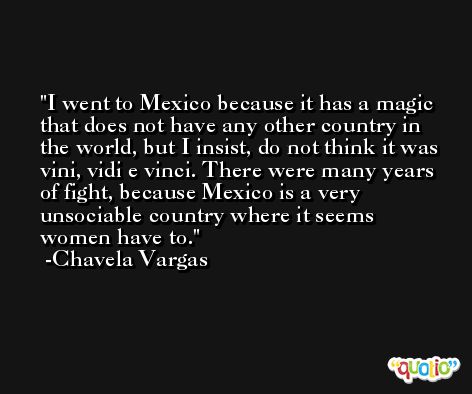 I am a friend of life, at 80 life tells me to behave like a woman and not like an old woman.