If you enjoy these quotes, be sure to check out other famous writers! More Camille Paglia on Wikipedia.

If you live in rock and roll, as I do, you see the reality of sex, of male lust and women being aroused by male lust. It attracts women. It doesn't repel them.

In the theory of gender I began from zero. There is no masculine power or privilege I did not covet. But slowly, step by step, decade by decade, I was forced to acknowledge that even a woman of abnormal will cannot escape her hormonal identity. 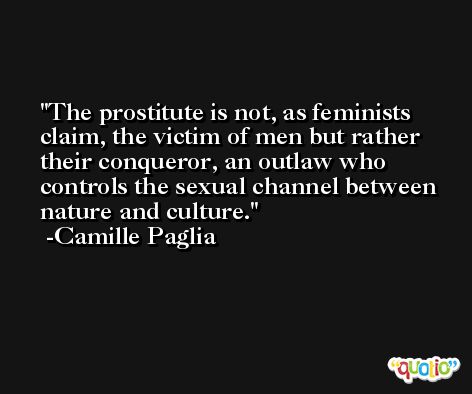 My thinking tends to be libertarian. That is, I oppose intrusions of the state into the private realm -- as in abortion, sodomy, prostitution, pornography, drug use, or suicide, all of which I would strongly defend as matters of free choice in a representative democracy.

Pornography is human imagination in tense theatrical action; its violations are a protest against the violations of our freedom by nature. 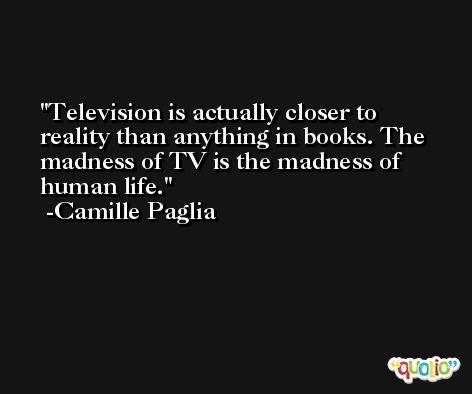 Prostitution is not just a service industry, mopping up the overflow of male demand, which always exceeds female supply. Prostitution testifies to the amoral power struggle of sex, which religion has never been able to stop. Prostitutes, pornographers, and their patrons are marauders in the forest of archaic night.

A woman simply is, but a man must become. Masculinity is risky and elusive. It is achieved by a revolt from woman, and it is confirmed only by other men. Manhood coerced into sensitivity is no manhood at all.