A contemporary and intimate friend of Ennius, he was born in the territory of the Insubrian Gauls, probably in Mediolanum, and was probably taken as a prisoner to Rome (c. 200), during the great Gallic war. Originally a slave, he assumed the name of Caecilius from his patron, probably one of the Metelli. He supported himself by adapting Greek plays for the Roman stage from the Ancient Greek comedy#New Comedy/New Comedy writers, especially Menander, a genre called Fabula palliata/Palliata Comoedia. If the statement in the life of Terence by Suetonius' minor works/Suetonius is correct and the reading sound, Caecilius's judgment was so esteemed that he was ordered to hear Terence's Andria (exhibited 166 BC) read and to pronounce an opinion upon it.

If you enjoy these quotes, be sure to check out other famous poets! More Caecilius Statius on Wikipedia.

He plants trees to benefit another generation.

In doubt, fear is the worst of prophets. 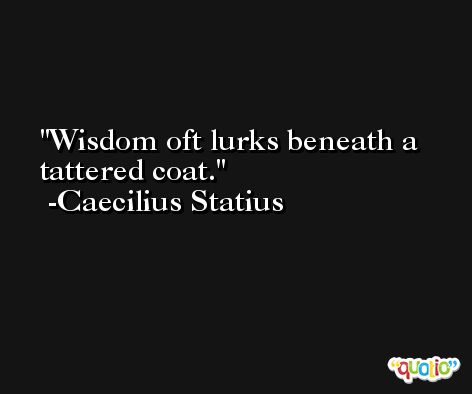 Grant us a brief delay; impulse in everything is but a worthless servant.

The whole world is a man's birthplace.