"Bruno Bettelheim" was an Austrian-born American child psychology/child psychologist and writer. He gained an international reputation for his work on Freud, psychoanalysis, and Serious emotional disturbance/emotionally disturbed children.

Currently, Bettelheim's theories in which he attributes autism spectrum conditions to parenting style are considered to be thoroughly discredited. However, as Michael Rutter has observed, "Many people made a mistake in going from a statement which is undoubtedly true—that there is no evidence that autism has been caused by poor parenting—to the statement that it has been disproven. It has not actually been disproven. It has faded away simply because, on the one hand, of a lack of convincing evidence and on the other hand, an awareness that autism was a neurodevelopmental disorder of some kind."

Bettelheim implied in several of his writings that he had written a PhD dissertation in the philosophy of education. His actual PhD was in art history, and he had only taken three introductory courses in psychology. A 2002 book on autism spectrum stated, "At the time, few people knew that Bettelheim had faked his credentials and was using fictional data to support his research."

If you enjoy these quotes, be sure to check out other famous writers! More Bruno Bettelheim on Wikipedia.

With the very disturbed child, understanding is essential, since we all know sadly that love is not enough. 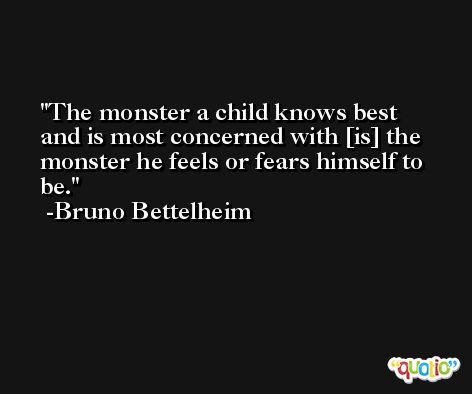