"William Fredrich Schroeder" is a former American football wide receiver in the National Football League/NFL. He attended Sheboygan South High School and then went on to the University of Wisconsin–La Crosse, where he starred in track and field. He last played with the Tampa Bay Buccaneers in 2004 NFL season/2004. On May 22, 2008 Schroeder informed Green Bay Packers general manager Ted Thompson that he would like to retire as a Packer.He signed with the Green Bay Packers on May 21, 2008.

http://blogs.jsonline.com/packers/archive/2008/05/22/schroeder-to-retire-as-a-packer.aspx Schroeder to retire as a Packer He signed with the Packers on May 21, 2008 and retired the next day.http://www.madison.com/wsj/blogs/Packers/287729 Schroeder retires a Packer. In 2001, Schroeder lead the all NFC players in yards per reception.

I wanted to do something different. Plus I'm going where the market is being driven and it's a need everybody has. 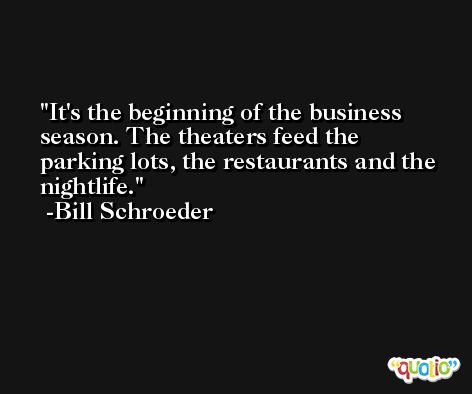 We'll also cater to the working people. If they can't make it during working hours, we'll meet them at their house or if they want to stop in here, no problem.

They speak English, they drive a hard bargain, they know what they're doing. So anyone who thinks this is going to be a dumping ground for our products is mistaken. The learning curve can be pretty substantial.