"Helen Beatrix Potter" was an English people/English author, illustrator, natural scientist and Conservation movement/conservationist best known for her imaginative children's books, featuring animals such as those in The Tale of Peter Rabbit, which celebrated the British landscape and country life.

Born into a wealthy Unitarianism/Unitarian family, Potter, along with her younger brother Walter Bertram (1872–1918), grew up with few friends outside her large extended family. Her parents were artistic, interested in nature and enjoyed the countryside. As children, Beatrix and Bertram had numerous small animals as pets which they observed closely and drew endlessly. Summer holidays were spent away from London, in Scotland and in the English Lake District where Beatrix developed a love of the natural world which was the subject of her painting from an early age.

She was educated by private governesses until she was 18. Her study of languages, literature, science and history was broad and she was an eager student. Her artistic talents were recognized early. She enjoyed private art lessons, and developed her own style, favouring watercolour. Along with her drawings of her animals, real and imagined, she illustrated insects, fossils, archeology/archaeological artifacts, and fungi.

If you enjoy these quotes, be sure to check out other famous writers! More Beatrix Potter on Wikipedia.

The Tale of Peter Rabbit.

Thank God I have the seeing eye, that is to say, as I lie in bed I can walk step by step on the fells and rough land seeing every stone and flower and patch of bog and cotton pass where my old legs will never take me again. 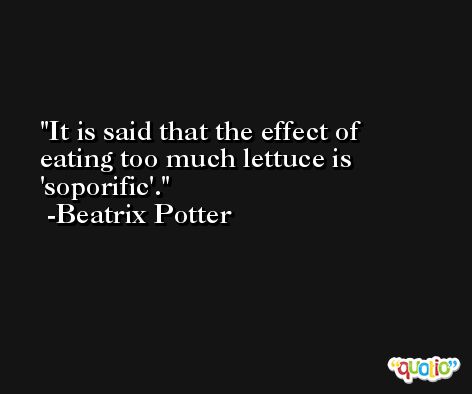 Thank goodness I was never sent to school; it would have rubbed off some of the originality.

I am worn to a raveling.