"Ann Druyan" is an American author and producer specializing in productions about cosmology and popular science. She was a co-writer of the 1980 Public Broadcasting Service/PBS Documentary film/documentary series Cosmos: A Personal Voyage/Cosmos, hosted by the late Carl Sagan, whom she married in 1981. She is the creator/producer/writer of the follow-up, Cosmos: A Spacetime Odyssey.

She was in charge of music selections that were included with the pioneering spacecraft, Voyager 1 and Voyager 2.

If you enjoy these quotes, be sure to check out other famous writers! More Ann Druyan on Wikipedia.

I was very much involved in updating the imagery, so it will seem new in terms of the latest effects, but we haven't changed the text we wrote 25 years ago.

He had a passion for democracy, for people to make informed decisions so they can think critically, ... He was rare blend of science and poetry and social consciousness. 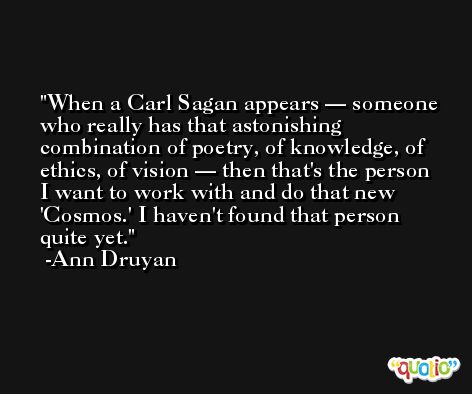 What Carl used to say is, 'When you're in love, you want to tell the world,' ... He wanted to communicate that the nature of the universe is so thrilling and inspiring and spiritually uplifting.

The Science Channel has done a beautiful job of enhancing the visuals by giving new visual expression to our scripts, and leaving the greatness of Carl untouched. 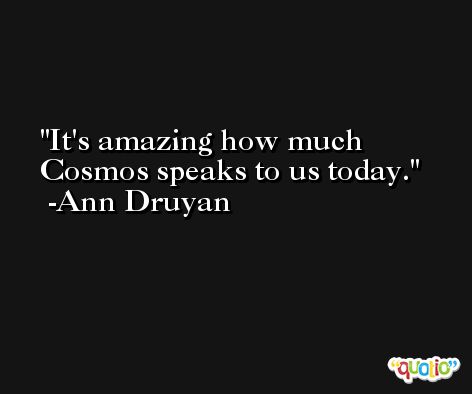 I love this chance to cut away from Carl and really show the most visually dazzling concepts. The Hubble didn't even exist then, and we've leaned heavily on Hubble images here.

I really think it's a tribute to Carl. To me, it's a kind of instant scientific literacy.