"Robert Andrew Pick" is a former England/English cricketer, and is the former coach of the English U-19 cricket team/England Under-19 team and the Canadian cricket team/Canadian national team. He is currently the ICC High Performance Manager for the Americas Region.

An express-pace bowler, Pick played county cricket for Nottinghamshire County Cricket Club/Nottinghamshire. He made a somewhat inauspicious first-class cricket/first-class debut against Hampshire County Cricket Club/Hampshire in July 1983 English cricket season/1983, returning first-innings figures of bowling analysis/20-3-101-0. During this match he also made his List A cricket/List A debut in the John Player League, taking 1-56 from eight overs, his victim being Mark Nicholas. Pick's maiden first-class wicket finally arrived in the second innings of his third game, when he dismissed Yorkshire County Cricket Club/Yorkshire's Martyn Moxon, but he ended the season with a dismal record of just seven first-class wickets.He received notoriety for his personal record pace of 95 mph.

If you enjoy these quotes, be sure to check out other famous coaches! More Andy Pick on Wikipedia.

The trip has given players experience of conditions similar to those they might experience in Colombo. But we have to be honest and say that it is a negative.

The way I'm looking at it at the moment and the impression that I'm getting from the people in Canada is that I think the World Cup is the icing on the cake and I think that realistically we go to the World Cup in the hope of putting on a good performance against England and New Zealand -- and hopefully beating Kenya. 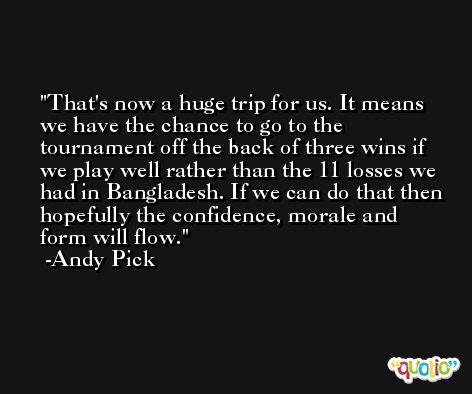 A chance, as a coach, to take a team to the World Cup finals is probably as high up the tree as it gets, certainly with one-day cricket.