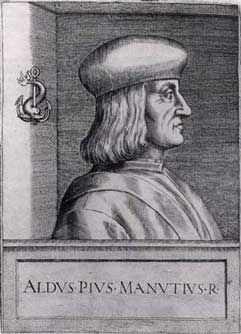 "Aldus Pius Manutius",[http://www.telegraph.co.uk/culture/books/3607194/Pay-attention-its-important.html The Telegraph. "Pay attention: it's important!] This is a celebration of punctuation, full of jokes and anecdotes and information. It also introduces us to a new hero, and, as a fitting act of deference, I am going to put down a colon before writing his name: Aldus Manutius the Elder. This Venetian printer, who lived from 1450 to 1515, was the inventor of the italic typeface and also the first to use the semicolon." Retrieved 09 NOV 2010. the Latinisation (literature)/Latinised name of "Aldo Manuzio" was an Italian Renaissance humanism/humanist who became a printer and publisher when he founded the Aldine Press at Venice. Sometimes he is called "Aldus Manutius, the Elder" to distinguish him from his grandson, Aldus Manutius the Younger/Aldus Manutius, the Younger.

His publishing legacy includes the distinctions of inventing italic type, establishing the modern use of the semicolon, developing the modern appearance of the comma, and introducing inexpensive books in small formats bound in vellum that were read much as modern paperbacks are.

Talk of nothing but business, and dispatch that business quickly.