Al Edwards is a native Houstonian. He is the sixth child out of the sixteen children born into the union of Reverend E. L. Edwards, Sr. and Josephine Radford Edwards.

• He is a graduate of Phyllis Wheatley High School .

• He received a Bachelor's degree from Texas Southern University, Houston, Texas in 1966, a Certificate in Corrective Therapy at Tuskegee Institute in Alabama, and a realtor and mortgage broker.

• He was involved in the Civil Rights Movement where he participated in peaceful marches and demonstrations throughout the United States of America with Dr. Martin Luther King, Jr., Reverend Jesse Jackson, Mr. Carl Stocks, Reverend William (Bill) Lawson, and others.

• He is a member of Alpha Phi Alpha Fraternity.

• He is a thirteen term elected member of the Texas House of Representative and has been serving in that capacity since 1978.

If you enjoy these quotes, be sure to check out other famous politicians! More Al Edwards on Wikipedia.

He stepped up in the second half.

When you talk about changing the rules, that takes time, and it always involves more than just a committee. 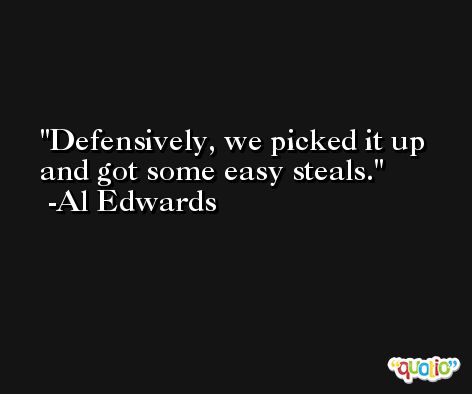