"Adam Treu" was a Center (American football)/center in the National Football League/NFL. He walked on to University of Nebraska-Lincoln after playing at Pius X High School (Nebraska)/Pius X High School in Lincoln. He won back-to-back National Championships with the Cornhuskers in 1994 and 1995 playing left tackle and performing all the long snapping duties. He was drafted by the Oakland Raiders in the 3rd round (72nd overall) of the 1997 NFL Draft.

It came about faster than I expected. We've gotten the bad apples, so to speak, out of here and replaced them with good, quality guys.

I'm pretty excited about our team unity. There's no real jerks on this team. Everyone gets along, and only good things come with (that). 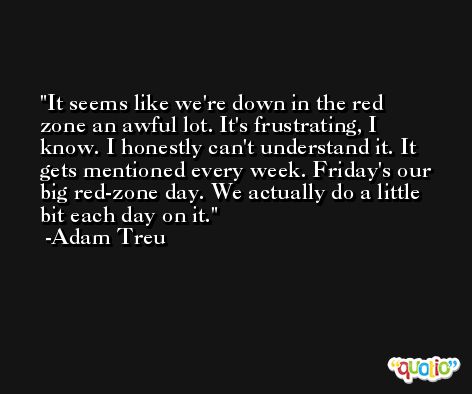